On December 9th, we carried a report from Sport, who explained Barcelona technical secretary Eric Abidal and his assistant, Ramon Planes held talks with Inter officials in Milan last week.

It was also stated they asked the Serie A side about Stefano Sensi and Lautaro Martínez.

According to today’s edition of Mundo Deportivo, Abidal and Planes watched Milan Škriniar in action against AS Roma last Friday and the Spanish champions have received good reports about the centre-back.

Last summer, Barcelona viewed the Slovakia international as an alternative to Matthijs de Ligt after the Dutchman snubbed them for Juventus.

Škriniar signed a new contract in May and his current deal with expires in 2023.

Despite that, the Catalan newspaper reports Inter would be willing to negotiate the player’s sale, if they receive a good offer. 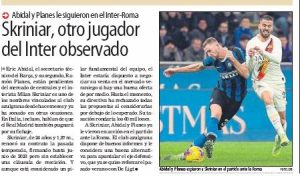 Mundo’s report on Škriniar comes less than a month after his agent claimed Barcelona and Real Madrid are keen on his client.

“Real Madrid and Barcelona are competing for his signing for the last two years. Now Real Madrid are closer to reaching agreement with Inter Milan because they want and they need him much more than Barcelona,” Mithat Halis was quoted as saying by AS.

“There was something” – Player suggests Manchester United January interest was real

“There was something” – Player suggests Manchester United January interest was...