The Nerazzurri want to strengthen midfield in January and their top targets are Ivan Rakitić and Arturo Vidal. Both their contracts expire in 2021 and the La Liga winners want to raise cash from their sales.

Rakitić would cost around €30m, but Inter are only willing to negotiate next summer.

The Catalan club are aware Vidal remains Antonio Conte’s priority target and he would be available for €20m next month. Barca’s idea is to sell one of the two so that their midfield is not overcrowded.

Inter don’t have a huge amount to spend in January and they are looking for formulas to reduce the cost of a Vidal signing.

The midfielder is liked a lot at the Camp Nou and the striker is a firm target to become the long-term successor to Luis Suárez. Abidal and Planes asked Inter about the duo, including the contract situation of the Argentina international. 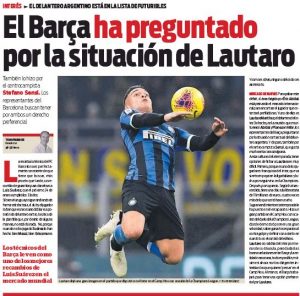 It’s difficult to see Martínez leaving San Siro in the winter market and also for anything less than his release clause of €111m.

However, Sport explains anything is possible due to the good relations between the two clubs.

With Inter looking at Barca players, the report states the Spanish champions will at least work to have a ‘preferential option’ for Martínez.