A long-time admirer of both Nikola Milenkovic and Dusan Vlahovic, Fabio Paratici is keeping his eye on the two Fiorentina players as he continues his quest to turn Tottenham around.

The director of football has already spent a large amount of money to give Nuno Espirito Santo the best possible team to forget the José Mourinho era, and following the acquisitions of Bryan Gil, Pierluigi Gollini and Cristian Romero, the two Serbians could follow.

That’s according to Corriere Fiorentino, who explain that Paratici ‘would be happy to bring them to London’.

His idea is to ‘complete a maxi-operation that between one thing and another could bring more than €80m into Fiorentina’s coffers’, as he seeks to sort out a double deal for the pair.

That’s seen as an ‘avalanche of money’ that any club, ‘especially in Italy, would have a hard time saying no to’.

They are, however, two very different operations, since Fiorentina are rather open to the idea of selling Milenkovic following the collapse of the West Ham deal, but Vlahovic is a whole different kettle of fish.

Rocco Commisso, the Serie A side’s owner, doesn’t want to lose his striker star, but if he were, he wants to ensure a great amount of money comes in as compensation. 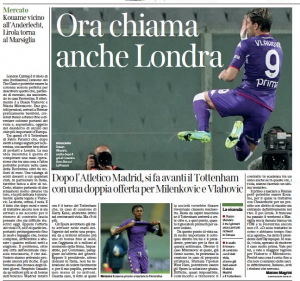 Corriere Fiorentino point out that ‘in the event of the sale of Harry Kane’, Spurs ‘would go straight to the purple centre-forward’, before echoing claims from Monday that a five-year contract offer has already been made to Vlahovic, one of €5m/year + €1m of bonuses added to a €2m signing on fee.

It’s ‘impossible’ for Fiorentina, who have been trying to get the goalscorer to renew, to match that, yet Commisso ‘has no intention of giving in easily and demands no less than €70m for his protégé’.

As for Milenkovic, Spurs ‘could be the right solution’ as it’s ‘difficult, almost impossible, to convince him to renew the contract expiring in a year’.

All in all, a worrying situation for Fiorentina, but a lot seems to rest on Harry Kane being sold, meaning that until that happens, Vlahovic is likely to remain at the Serie A side (unless Atlético Madrid come swooping in).

Milenkovic, on the other hand, could be a relatively straightforward deal.