Aston Villa midfielder Marvelous Nakamba has been warned to choose wisely by Zimbabwe coach Zdravko Logarusic amid speculation about his future.

Nakamba arrived at Villa Park in a £10.8m deal from Club Brugge last summer and enjoyed a solid if uninspiring first season in the Premier League.

His future at Aston Villa is uncertain, though, with them likely to undergo something of an overhaul after narrowly escaping relegation from the Premier League at the end of the season.

Indeed, there have already been several reports about interest in him, with recent claims that Turkish side Trabzonspor are eyeing up a loan deal for next season.

Logarusic, though, doesn’t seem keen on that and has warned the 26-year-old to choose his future wisely, and on his own.

“It’s very important to make decisions by himself,” he told Zimbabwean newspaper H-Metro.

“We just have to see how it goes for him, but he has to make the decision which is good for his future. He has to consider how he feels at Aston Villa first.

“And like I said I think he is comfortable being in the Premier League and if that is the case he has to stay there if possible.”

Like many players, Nakamba’s season was heavily affected by the break enforced by the Coronavirus outbreak.

Prior to the suspension of the league, the midfielder had been a regular for Villa, starting in four of the five games before it.

He played 90 minutes in the return against Leicester, but that proved to be his final 90 minutes of the season, with just one start coming from the remaining ten games. 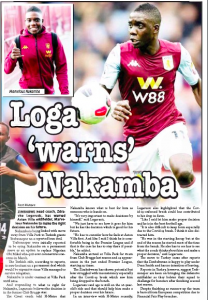 That may have led to rumours about his future, but Logarusic insists he needs to find out Aston Villa manager Dean Smith’s opinion before thinking about it.

“It is also difficult to keep form, especially due to the Covid-19 break. I think it also distracted him,” he added.

“He was in the starting lineup, but at the end of the season, he started most of the time from the bench.

“He also has to see what the coach thinks about him, and make a proper decision.”