Aston Villa and Crystal Palace are ‘determined’ to invest in Juventus midfielder Weston McKennie this summer but need to convince him on the move.

That’s according to Tuttosport, who cover the situation around the midfielder as he looks set to leave the Italian giants.

They explain that a swap deal with Tottenham for midfielder Moussa Sissoko is ‘on the cards’, but the current alternative is a transfer to Aston Villa.

Juventus are aware that McKennie can bring in money, and there is a long line of suitors for the midfielder, all of whom are ‘carefully monitoring’ the situation around him.

Tottenham want him courtesy of Fabio Paratici, who took him to Juventus on a permanent basis last year and remains a big fan of him.

Juventus are open to a swap deal involving Sissoko as he would fit into Max Allegri’s side far more comfortably than the Texan. That’s not the only possible route to the Premier League for him, though. 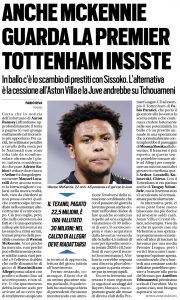 There are ‘less famous’ options for him in the form of Crystal Palace and Aston Villa, who are both ‘determined to invest cash’ on the midfielder.

McKennie is not particularly keen on either of those moves, though, believing that the Villans and the Eagles are ‘average’ Premier League teams.

Juventus are keeping both options open despite that, however, as they could use the money from either Villa Park or Selhurst Park to try and sign Monaco’s Aurélien Tchouaméni, who would be their first choice signing.