During the last summer transfer window, William Carvalho was so keen to move to the Premier League that he looked fondly on a switch to West Ham.

Despite spending years being linked with some of the biggest, and currently most successful, clubs in England, Carvalho was prepared to join the Hammers just to get his Premier League dream off the ground.

It didn’t happen, as a fee couldn’t be agreed, and now according to A Bola, the midfielder could be set for a much bigger dream: Arsenal.

The Portuguese newspaper state that talks have already been initiated by Arsenal, who wish to ‘reserve’ the player ahead of the World Cup. The club are looking for some kind of ‘pre-agreement’, which would see them secure Carvalho.

It’s Arsene Wenger said to be pushing the potential transfer, and the Arsenal manager has apparently already made it known he’s keen on the transfer happening. 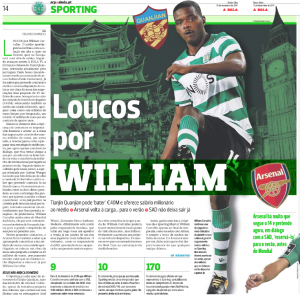 Arsenal are aware they’ll need to agree a €40m transfer fee to secure Carvalho, say A Bola, because that’s what it’s claimed a Chinese club are prepared to offer.

Tianjin Quanjian would be happy to pay €40m and a huge salary to the player, but aren’t anywhere near as attractive as Arsenal on a football level.

Carvalho, an admitted admirer of Arsenal, needs to push his agent to get the Emirates move sorted, even if there’s just an ounce of truth in the latest claims.

The Portuguese press have been running Carvalho rumours for years, and the player really deserves a good move, better than West Ham and better than China.