Adrian is skipping on air at the moment. The West Ham goalkeeper has got what he believes is his rightful place back, and is happy to talk to the Spanish media about it repeatedly.

Gone are the dark days of Slaven Bilic, who Adrian isn’t afraid to throw under the bus, and now comes the bright horizon of David Moyes. Erm, well, at least for Adrian.

Clearly falling out with Bilic over not being first choice, Adrian was further annoyed when West Ham rejected chances for him to move. Newcastle United and Crystal Palace were among the clubs interested according to rumours, and Adrian has backed that up himself.

Newcastle and Crystal Palace both needed a goalkeeper during the summer window, and didn’t manage to get one, and Adrian has told Marca: “The worst moment was when I wanted to leave on loan in the summer – Betis, Deportivo, Newcastle and Palace probed – and they didn’t open the door for me.” 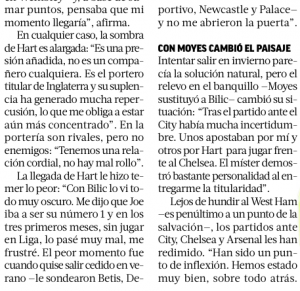 It must be said that in Spain, interest has since been talked down. Either La Liga clubs were vaguely interested but didn’t want to pay much, or any, money, or it’s been exaggerated… that’s overwhelming been the Spanish slant.

Whether that suggests a similar scenario for Newcastle United and/or Crystal Palace is unknown.