On April 9th, we carried a report from AS, who explained that Zinedine Zidane wants Real Madrid to make an effort in signing Eduardo Camavinga, if his side fail to land Manchester United’s Paul Pogba.

This report has made it to today’s edition of the newspaper and AS provide additional information on other clubs who are interested in Rennes’ talented youngster.

The midfielder has been a regular figure in the French club’s starting XI this season and has made 31 starts in all competitions.

Although the Gunners and other clubs remain keen on signing the teenage sensation, they could face a battle from Real Madrid to complete Camavinga’s transfer, according to AS. 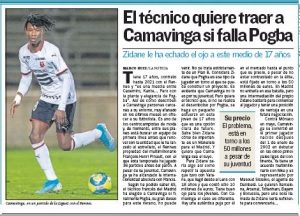 The report states ‘a single call’ from Zidane would be sufficient to convince Camavinga to join Real Madrid over Mikel Arteta’s side and other suitors.

Arsenal can retain hope of signing the French teenager, if the La Liga side decide not to make an approach for Camavinga.