Atlético Madrid’s Thomas Lemar has failed to score or assist in La Liga and the Champions League this season, and is currently on the sidelines recovering from a hamstring injury.

Earlier this month, we covered claims from Spain that Arsenal and Tottenham Hotspur have been named as suitors for the 24-year-old. Wolverhampton Wanderers were also dragged into the mix due to their connection with the winger’s agent, Jorge Mendes.

The Gunners and Spurs get a mention in Wednesday’s edition of AS as they claim the two north London clubs have asked about the France international’s situation at the La Liga side.

According to the report, both Mikel Arteta’s side and Tottenham have made offers for the former AS Monaco man. However, their proposals ‘do not come close’ to what Diego Simeone’s side are demanding for the player. 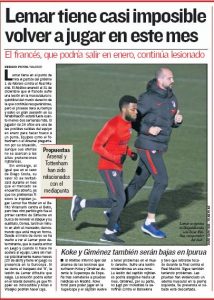 AS doesn’t specify the details of offers made by Arsenal and Tottenham, and they also don’t mention the figure that Atlético are demanding.

Atlético, who are in the market looking for a new No 9, would be willing to sanction Lemar’s sale. The newspaper adds his injury makes it difficult to leave in the winter market.