Italian side Torino are set to up their efforts to sign midfielder Lucas Torreira from Arsenal and reunite him with former manager Marco Giampaolo.

The Serie A side have been heavily linked with a move for the Uruguayan this summer as he has found himself out of favour under Mikel Arteta.

A deal has been edging closer for a couple of weeks, with both clubs keen to get it over the line but so far differing on their valuation of the 24-year-old.

Tuttosport cover the situation today and state that Torino have made ‘decisive steps forward’ to match Arsenal’s demands and bring Torreira to the club.

The Gunners want €24m for their man, but that figure can be paid in two instalments, one to be paid now and one in a year’s time.

Arsenal are taking their time before ‘countersigning’ on an operation of that nature but the deal ‘remains hot’ and could be unlocked at ‘any moment’ in a ‘few more days’.

As far as the newspaper is concerned, the two clubs are ‘striving to find a solution’; something backed up in England, where there is consistent talk about a deal being ready to go.

Corriere Dello Sport offer a different take on proceedings, though. They don’t mention a permanent deal but instead say Torreira could return on loan. 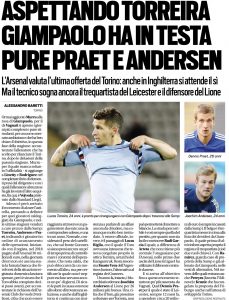 According to their information, Torino have offered a two-year loan deal with a purchase option tacked onto the end of it.

What that purchase price is, isn’t mentioned but they do say the overall deal would be between €20-22m including Torreira’s €2m in wages.

Their stance is that would be acceptable for the Gunners as they state confidently that ‘the opening seems to have arrived’ to get the transfer over the line.

So a very different view from both newspapers, although there is that common two-year theme in which the loan lasts for that long or the price is paid over that term.

Either way, it’s pretty clear that a deal is there to be done, with Torino keen to sign him and Arsenal very open to a sale.