The La Liga side’s poor financial conditions has made them look for ‘imaginative formulas’ to strengthen the squad.

Aubameyang has two years left on his contract and he would ‘welcome leaving Arsenal’ after the Gunners failed to qualify for the European competition.

Coutinho, who doesn’t want ‘uncertainty’ around his future, ‘must agree’ for the swap deal to go through, and he feels his time at the Camp Nou has come to an end, even though he has a contract until 2023. 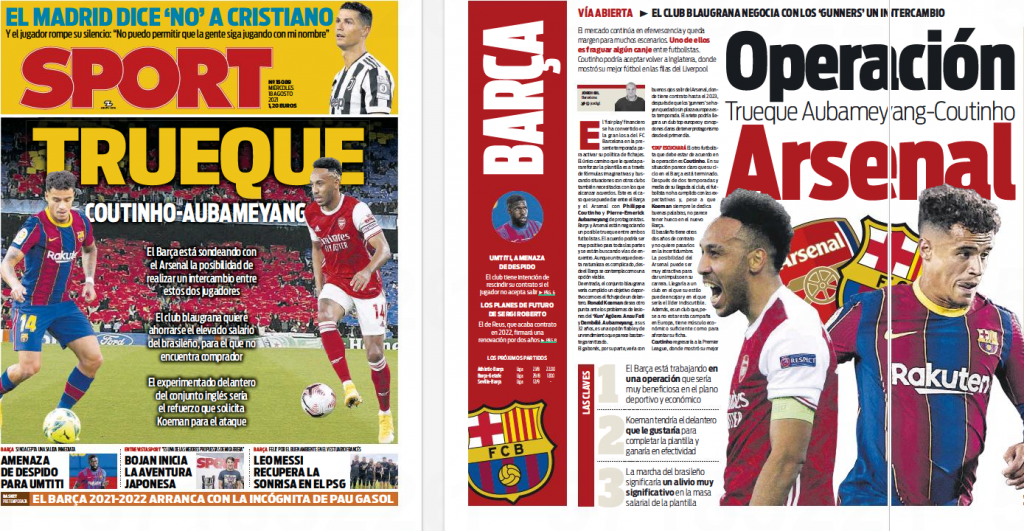 It’s said Mikel Arteta’s side could be attractive for the former Liverpool man and Arsenal have enough financial resources to take care of his wages.

If the deal goes through, Coutinho can return to England, while Koeman can get a quality striker in the form of Aubameyang.

‘The agreement could be very positive for all parties and ways of meeting are being sought. Although a barter of this nature is complicated, from Barça it is seen as a viable option,’ says Sport.

The newspaper states ‘talks will continue’ between the two clubs, but they haven’t taken into account whether Arsenal will still look to sign Coutinho if they sign Martin Ødegaard.

As per various reports, the Norwegian is close to joining the Gunners and this deal could put a break to the swap deal with Barcelona.