Andraz Sporar’s transfer from Sporting to Middlesbrough is ‘almost official’, according to the latest reports from Portugal.

Newspaper Record now writes that the coming hours should be ‘decisive’ for the clubs to close a deal for the striker.

The outlet recalls that Boro have put on the table an offer for a one-year loan deal, while Sporting want to include some clauses that could make the transfer permanent.

This is exactly the issue being discussed right now, as the purchase would be triggered depending on a number of goals scored by the striker during the season and Middlesbrough’s potential promotion to the Premier League. 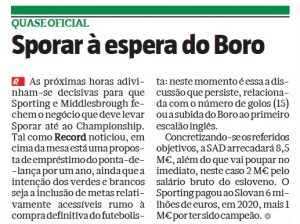 Record says in case the clause is triggered, then Middlesbrough would pay €8.5m for the move.

The English club should also take on the player’s salary, which is of €2m gross per season.

The newspaper claims Sporar is currently ‘waiting’ for Boro to complete the move.

The striker, who had seven goals and six assists last season, is now out of the Lions’ plans for the coming season, hence why a deal is being discussed.