It’s with a bit of surprise that we today see Arsenal being strongly linked to Porto midfielder Otávio.

Portuguese newspaper Record today features a big story regarding the Dragons’ efforts to hold the player this summer, and it’s said that despite the club’s need of making money with sales, the 27-year-old should still be held in the squad.

Otávio isn’t overly keen on an exit either, as he feels comfortable at Porto, having even chosen to live in Portugal after he retires, and plans to continue playing regularly this year to guarantee a spot in the World Cup.

Still, Record claims that Premier League sides have ‘an eye’ on his evolution at the Dragons, and that’s where Arsenal come in. 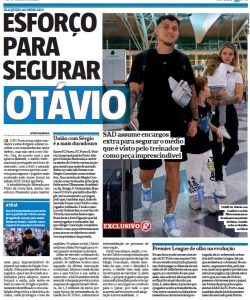 It’s said that among the English clubs who are interested in Otávio, there’s one who ‘stands out’, ant that’s Arsenal.

However, it’s ‘not certain’ that the Gunners will really go for his signing and make an official bid.

Record makes it clear there’s only one way Porto will let the midfielder go this summer, and that’s if a club shows up and trigger his release clause, which stands at €60m.