Home Premier League Arsenal Arsenal signing could be blocked due to Tottenham being so tough on...
SHARE

In Saturday’s edition of Marca, Matteo Kovacic gave a big interview in which he was very clear about his desire to leave Real Madrid.

The Croatian international appeared genuine, it was too dramatic and dangerous for a renewal play, and it seems he’s frustrated at the Champions League winners.

Kovacic made 32 appearances for Real Madrid last season but around half of those were as a substitute and he’s rarely picked to start for the biggest games if everyone is fit.

The footballer believes this holds him back for Croatia, and that he’s only had 20 World Cup minutes so far is probably an issue for the 24 year old. 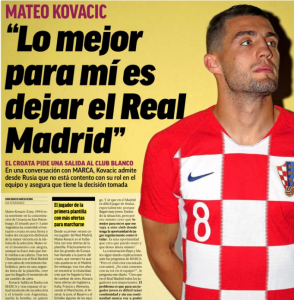 Marca also stated: ‘Kovacic has offers from England, Italy, France and Germany, with Manchester, Arsenal, Juve, Bayern and Schalke some of the teams that have knocked on his door and are willing to sign him this summer.’

The Spanish newspaper have understandably carried on their story on Sunday and the message is clear: Kovacic isn’t going anywhere as far as Real Madrid are concerned.

A club can’t force the move, given the midfielder has a €300m buyout clause, and the plan is to have a chat with the player and convince him he’s wrong.

One of the reasons for that is Luka Modric’s advancing years and the hope that Kovacic can replace him. Another option is named as Tottenham’s Christian Eriksen, but Madrid don’t want to risk losing a player they already have for one they may not be able to get.

The Spanish media repeat, several times a week at the moment, just how difficult, and 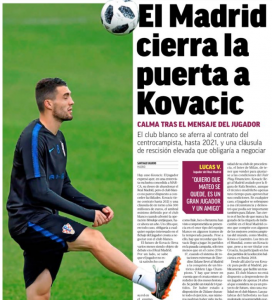 near impossible, it would be to get Eriksen from Tottenham. So whilst there’s an admiration for the Spurs star, it isn’t going any further than that.

And without a good shot at their replacement, Madrid won’t want to let Kovacic join Arsenal or anyone else.

Wolverhampton star ‘not willing to attend’ national team due to club’s...