Home Europe Watford look likelier than Newcastle as both clubs said to be in...
SHARE

Just under a week ago we covered claims from Portugal that Watford are keen on Bruno Varela, Benfica’s 23 year old back-up goalkeeper.

It was a big story with it being claimed Benfica are looking to get €15m from selling the player.

Watford have been linked to a string of goalkeepers this summer, but after signing 19 year old Pontus Dahlberg from IFK Göteborg in January, and loaning him back for the rest of the season, it’s arguable whether the Hornets really need another young stopper.

Dahlberg is very highly rated in Sweden and it wouldn’t be thought that he’s so many years away from contention that Watford would sign a 23 year old who would also be unlikely to take the number one jersey straightaway.

At least the Watford claims made more sense than the Newcastle United ones which were to come. Three days ago Portuguese newspaper Record went big on Varela to Newcastle, stating it was a story being pushed by ‘several English media outlets’.

But it wasn’t, not at the time anyway. 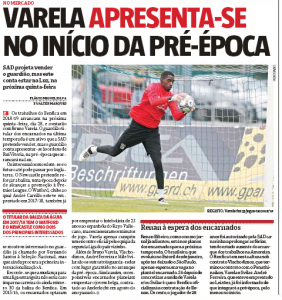 Sunday’s edition of the same newspaper names both clubs as being in for the player.

There seems to be an effort from Benfica and their local media to talk Varela and a transfer up, but the €15m figure would appear fanciful.

A year ago Benfica sold Ederson to Manchester City for €40m and Varela simply isn’t worth nearly half of that.