Sporting’s interest in the Arsenal striker Lucas Perez is big news in Portugal today, with newspaper A Bola having a full page report about it.

According to the outlet, manager José Peseiro has the 29-year-old as his ‘favourite option’ for the market, especially because of the many attacking positions the Spaniard can play in.

But as in every transfer rumour that Portuguese clubs are involved in, there is a price problem. Sporting would struggle to sign Perez from Arsenal, no matter if on a loan or a permanent deal.

In case of a loan, the Lions would have problems paying his wages, as he’s considered an expensive player. And in a permanent deal, it’s said that Arsenal are unlikely to accept less than a €5m fee. 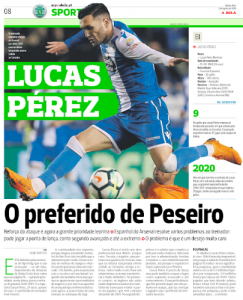 We’re still pretty sure that if Sporting sign Perez permanently, they would have to afford his salary as well. So that’s two problems in the second case, which maybe A Bola are missing.

In any case, it doesn’t sound like there are open negotiations for a deal, as only the interest is reported for now.