Another day, another Pedro Obiang exit from West Ham update, but, and it’s a big one, it seems like we’re nearing the end of the line one way or another.

The sources are the same as always (Gazzetta dello Sport and Il Secolo XIX), as they appear to be the only ones really trying to find out what’s going on behind the scenes of this rather tedious standoff.

Sampdoria, as a club, are currently in England, having played Fulham in a friendly at Aldershot, which they won 1-0.

However, they also brought along their transfer party, comprised of their technical director Walter Sabatini and director of football Carlo Osti, and have asked West Ham for a meeting to get this transfer sorted once and for all, according to Gazzetta. 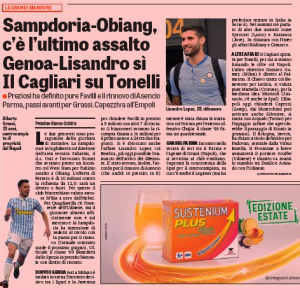 The offer from the Serie A side remains €10m, while the Hammers are asking for €12.5m, which the Italians aren’t prepared to meet.

The meeting is described as an ‘in or out’, which we’re guessing is ‘take it or leave it’.

This is backed up by Il Secolo XIX, who state there’s give or take €2m between the two sides, which is described as an ‘unsurmountable’ amount.

We’ll be finding out real soon how tough West Ham’s stance is.