Recently changing owners, it’s widely believed AS Roma will make a return for Chris Smalling in the near future but will still be reluctant to pay the €20m demanded by Manchester United.

That’s why they have alternatives for the role should they fail to sign the England international, and with Jan Vertonghen now at Benfica, new names are popping up, among which is that of Sokratis Papastathopoulos, currently at Arsenal.

The Greek centre-back has been another casualty of the Unai Emery to Mikel Arteta managerial change at the Emirates, as he failed to make an appearance in the league following the Covid-19 break.

He did feature for a whole three minutes spread over two FA Cup fixtures, but at 32 years of age and with one year left on his contract, he’ll be wanting a whole lot more than that before hanging up his boots.

That’s why the idea of a return to Italy, where he previously played with Milan and Genoa, is an option, reported by Corriere dello Sport. 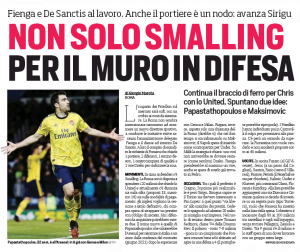 The Italian newspaper explain the Arsenal man is the ‘new name’ on the block at AS Roma, and he could ‘say goodbye’ to the Gunners to come back to Italy.

There aren’t any detail, but it appears the Serie A side have ticked the defender’s name on a list somewhere, and with no space for him in Arteta’s plans, it might be a match made in heaven.

After all, Smalling reinvented himself under Fonseca, so why wouldn’t Sokratis be able to do the same?