Two days ago, AS and Marca explained Real Madrid and Arsenal are sorting out a deal that will see Martin Ødegaard move to the Emirates on a permanent transfer.

He wasn’t seen in training with the La Liga side yesterday as the Norway international was ‘about to be transferred’ to Arsenal.

The midfielder’s absence from training was because he ‘already travelled to London’ to carry out his medical tests with the Gunners, according to VG in Norway.

Los Blancos and Mikel Arteta’s side have ‘agreed on a transfer fee’ for the 22-year-old’s sale and he will be most the expensive Norwegian as the north London club will pay a fee between €35m and €40m to Carlo Ancelotti’s side.

Having already made a trip to London to carry out his examinations, Ødegaard is set to sign a five-year contract with Arsenal after clearing his medical tests.

VG say there’s a reason to believe an official announcement is ‘around the corner’ and the Gunners hope to have him ready to face Chelsea on Sunday.

Over at AS, they state both clubs have an ‘agreement in principle’ for Ødegaard’s transfer, and the Spanish giants will earn €40m from his move to the Emirates. 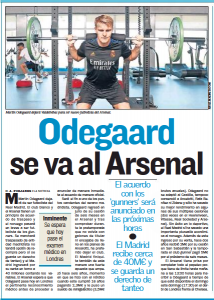 Arsenal are waiting for the Norwegian to carry out his medical tests in London today, ‘before proceeding to immediately announce the agreement officially’.

The newspaper adds the Premier League side are in a ‘hurry to complete all the paperwork’ because they have until 1pm on Friday to register Ødegaard for the weekend clash against Chelsea.

Ødegaard’s transfer is ‘imminent’ as he’s expected to pass his medical examinations today.