Takvim claim Galatasaray are in the market for a defensive midfielder this summer and they’ve identified AS Roma’s Steven Nzonzi as a target.

However, it’s claimed the Turkish club will face competition from Arsenal in the race to sign the player, who has this year slipped out of Didier Deschamps’ France squad.

The former Stoke City player is likely to leave the Serie A side in this window and, according to Takvim, Galatasaray and Arsenal are going head to head to sign the 30 year old.

Nzonzi joined Roma last summer, and Galatasaray are looking to loan the player from the Italian side to replace former Manchester City midfielder Fernando, who’s is said is likely to join Sevilla this summer. Gala are preparing to fight on all fronts next season after securing a place in the Champions League group stages.

It’s reported the Super Lig side are looking to act quickly to snap him up before Arsenal, and their board member Sukru Haznedar will fly to Italy to hold talks with both the club and player. 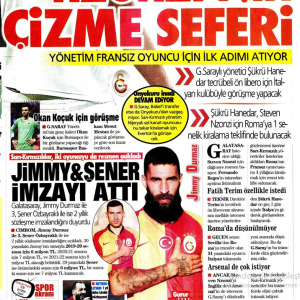 Nzonzi made 39 appearances for Roma in all competitions last season and he’s under contract at the Stadio Olimpico until June 2022.

He’s been linked with Arsenal since the beginning of time, so it’s quite possible this is transfer rumour painting-by-numbers.