For a while, Eric Bailly has been linked with a move to Lyon, with the French media believing there’s been genuine, and serious, interest in signing the Manchester United player.

A couple of days ago, L’Equipe reported the defender was a primary target for the Ligue 1 side.

There was no suggestion of a potential transfer fee, and Arsenal’s Laurent Koscielny and Sampdoria’s Joachim Andersen were also seen as options.

It would appear that whatever Manchester United would require in terms of a bid hasn’t been the only issue holding Lyon back from signing the player.

Today’s edition of L’Equipe reports Bailly himself is ‘not very enthusiastic’ about the idea. He’d been a ‘priority’ for Lyon, but the fact he’s not especially up for the move obviously makes it all unlikely. 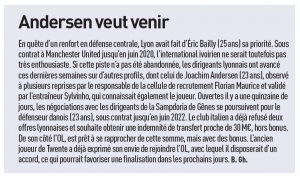 This has led Lyon to move to their other targets, and specifically Andersen. He wants the move, and two offers have been made to Sampdoria.

Both of those have been rejected, with the Italian club looking for close to €30m.