Around a week ago, there was so much confidence on Shkodran Mustafi moving to Arsenal, that anytime we published a story explaining the Valencia media said there’d been no offers, or something similar, then a small group of desperate Arsenal fans would show up and shout.

It would be done within 24/48 hours, Mustafi would play against Liverpool, at worst coming on as a substitute. Everything had been agreed, fee with Valencia, personal terms… THE LOT.

However, Mustafi very much stayed at Valencia, and was presented to fans at the weekend as part of the club’s yearly event. Valencia fans cheered Mustafi, despite giving grief to other players linked with a transfer, that’s probably because he’s good.

What didn’t help were contradicting claims from both the player’s agent (if it is his agent) and father. Real progress looked to be happening on Friday, when the Valencia media reported owner Peter Lim was flying to London. 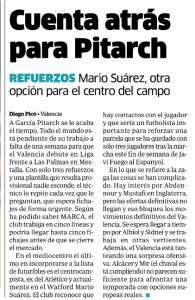 That would be the key to unlocking negotiations and stop all contradicting claims. If Arsenal made an offer to Lim’s face then there could be no question over receiving it or not.

Spanish newspaper Marca have a small piece in their Monday edition on Valencia transfers. They’ve spoken to a source close to the club, who told them new signings are expected soon, but the exit of Mustafi has been blocked because the final offer, the one expected to be big, hasn’t actually arrived yet.

That may just be a delay because of the weekend, and Arsenal fans will hope so because this is a mini saga which should, given Arsenal’s need for a defender, have been sewn up a while ago.