We’re getting to that time of the year when free transfers become the main talking point on the market, with many footballers’ deals running out next June.

Some will renew before the new year, some will explore their options before deciding to stay, and some will take the opportunity to try something new, earning a far larger paycheque in the process.

What Hector Herrera, currently at Porto, ends up doing is entirely up to him, but he won’t be short of suitors if he enters 2019 without having extended his stay in Portugal, and Arsenal are likely to be among those interested.

This is what Corriere dello Sport are reporting on Thursday, looking at the Mexican’s situation, claiming Roma are in pole to sign him, but they’ll have competition, including from Arsenal. 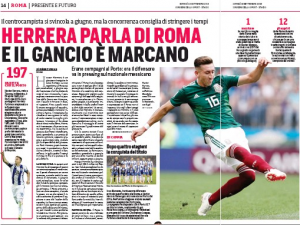 Barcelona, Arsenal and Paris Saint-Germain are all said to be lured by the prospect of signing the 28-year-old on a free, because who doesn’t like free things?

Herrera has apparently given Roma his approval, but many things can change between now and then, notably the amount of money placed on the table by clubs that want to sign him.

Should Unai Emery’s side come forward, they’ll undoubtedly offer him more money than the Serie A side, and it would then probably come down to who has the more enticing offer game time wise.

Would Herrera start in Arsenal’s midfield week in week out? That’s what he’ll want to know.