When many football fans think of scouts, the image which comes to mind tends to be a slightly dishevelled figure, sat in the stands, hiding his notebook from other spies.

Things have been changing, of course, with more credit given to those who source players for clubs, and that inevitably leads to more money.

On Sunday, Sport Witness covered claims from Germany that Arsenal have agreed to pay Borussia Dortmund a €2m transfer fee for Sven Mislintat.

Make no mistake, that’s not us hyping the way it’s being described in Germany, the €2m 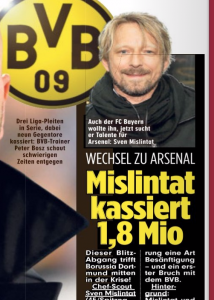 is very much being seen as a transfer fee, much like would be paid for a player.

It’s even pointed out Mislintat having a contract until 2021 helped raise the transfer fee Dortmund could ask for.

With such a fee comes comparable wages, and Bild now state Arsenal have agreed to pay a ‘mega-salary’ of €1.8m per year.

That’s €35k per week. Of course, Mislintat will have a grander job title, more power, and a wider role at Arsenal. But, still, €35k a week!

In a separate article, Bild state, such is the money on offer in England, German clubs may have to worry about other staff, like bus drivers.