Liverpool summer signing Mohamed Salah has been selected in the European Team of the Week after his performances against Southampton at the weekend.

Each week Gazzetta dello Sport pick the best eleven from outside Italy, and the Egyptian international has made the cut.

Salah was key in Liverpool picking up all three points in the 3-0 victory over Southampton on Saturday. The attacker scored the opening goal for Jurgen Klopp’s side with a long range effort, and he then added his side’s second just before half time.

The 25 year old has been one of the best signings of the last summer window, and given the transfer fees some players were going for he’s proving to be a bargain for Liverpool. 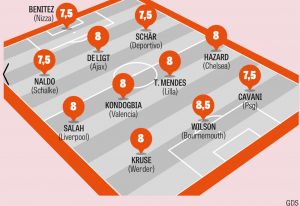 The win over Southampton will give Liverpool confidence going into their Champions League clash against Sevilla this week. The game in Spain could decide who finishes of top of Group E, after the two teams drew 2-2 at Anfield.

Salah has now been named in Gazzetta’s European Team of the Week several times this season already, leading the way for the Premier League.