Ander Herrera’s transfer to PSG was made official last week, with the midfielder joining the French champions as a free agent from Manchester United.

His arrival has not been met with a great fanfare from the club’s local media and there’s doubt over what his role in the club’s project will be. The Spaniard will have to impress quickly to convince people he’s been signed as more than simply an asset to sell on in a future transfer window.

One of the questions put to Herrera is why he chose to leave Manchester United despite Ole Gunnar Solskjaer wanting to keep him at the club.

“I don’t like looking at the past,” Herrera said. “But there were differences regarding the project and my importance within it. I was very happy, I have a lot to thank the club for, the fans and also Solskjaer. He did a lot for me to stay, but things didn’t happen. They arrived late and, by then, I’d already made the decision to play in Paris.

“I am very happy to have made that decision because I am enjoying this magnificent city, this beautiful stadium and this club, which has a glamour few can match.”

Judging his time at Old Trafford, he explained: “It has been fantastic. In five years I have played 189 games and I have been important for all the coaches. It is true that that the MVP (Sir Matt Busby award, 2016/17) makes one feel special and very happy, but I keep every moment that I have lived.”

Marca put it to Herrera that he had ‘numerous offers’ when leaving Manchester United, and asked why he chose PSG: “Because to leave United, the biggest team in England, you need something like PSG, which is the biggest in France. I could not play in another English club. The PSG is a group in continuous development and which is in one of the most beautiful cities in the world. 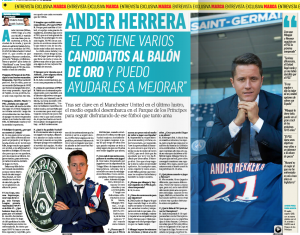 “I visited it as a tourist and I fell in love. Now I have the chance to play for his team, which has a very high ceiling and goals, and which has some of the best players in the world.”

Inevitably, Herrera was also asked about former teammate David de Gea potentially moving to PSG, and he answered: “David is my friend and is one of the best in the world, for me top 3, but here there are already two great goalkeepers. There is Areola, and Trapp returns after completing a great stage at Eintracht. You have to respect the people who are already there and expect Trapp and Areola to have a great season.”