West Ham United and Valencia are in a transfer battle to sign Maxi Gomez.

Reports from Spain suggested Jonathan Barnett, the representative of Celta Vigo star is demanding €3m in commission and the Hammers are willing to pay.

Speaking to Levante EMV over the weekend, Barnett rubbished these claims and stressed  “it all depends on who makes a sufficiently acceptable offer (to Celta),” and only then will his client will decide.

Monday’s edition of Sport has a report with a headline that reads ‘West Ham insists on Maxi Gomez’.

Within the story, it’s claimed Los Che are pessimistic about acquiring the Uruguayan’s services.

The deal which seemed almost completed last week is now becoming one of the soap operas of the window. The two Spanish clubs have agreed a deal and the forward had decided to wear the shirt of Valencia next season.

However, the 22-year-old decided to take time after Manuel Pellergini’s side arrived on the scene and Sport explains the agent would have played a key role in changing his client’s opinion.

Valencia have still not given up and there’s been contacts over the weekend to try to sign Gomez. They don’t want more delay and have urged all parties involved to give a quick response, which has also been reported by Super Deporte. 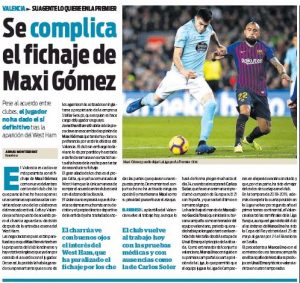 Meanwhile, Celta have already informed West Ham the only way they can close his signing is by paying his clause (which is set at €50m).

If they agree, then Gomez could snub Valencia and make a switch to the Premier League.