Friday’s edition of Mundo Deportivo has a big article saying Manchester United could return this summer to try and sign Ousmane Dembele from Barcelona.

The Frenchman is a difficult nut to crack for the Blaugrana right now. His contract with them expires in June 2022, and there’s a fear at Barca that the player and his representatives are laying the groundwork for a free transfer next summer.

Barcelona have been making renewal attempts, speaking to the player’s camp over the telephone and via email, but there’s an element of distrust.

Dembele hasn’t shown a great deal of interest in a transfer up to this point either, with Mundo Deportivo saying Manchester United ‘already wanted him last season’ and he turned down a late loan move.

This all adds to the fear of him playing the long game to become a free agent, and Barcelona not getting any financial return on the €105m (plus €30m bonuses) they paid to Borussia Dortmund.

Mundo Deportivo believe Manchester United ‘could launch’ for the player’s signing, however, it again sounds more through hope (increasingly desperate hope) than expectation. 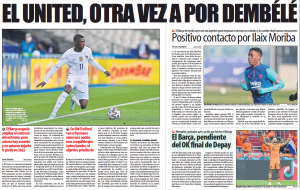 The Catalan newspaper even use claims from England to back that stance up, despite reporting it themselves countless times… they appear to feel strengthened in their hope by someone else claiming it as well.

Jadon Sancho is clearly the first choice at Old Trafford and a move for Dembele would be unlikely unless that deal fails.