Lucas Torreira has been a superb loan signing for Fiorentina, with the Arsenal owned player being one of the most important parts of La Viola’s team.

The midfielder is crucial for the club and the media local to the Serie A side have been celebrating his achievements recently, and explaining what a good capture he’s been.

After failing to settle at Arsenal, Torreira spent last season on loan at Atletico Madrid, and around the winter market it was insisted he wanted a return to South America. That couldn’t be arranged, and instead he went back to Italian football, where he’d succeeded previously with Sampdoria.

Everything has gone according to plan, and Corriere Fiorentino now report it’s ‘already considered a formality’ that the club will buy Torreira from Arsenal on a permanent basis. They have a €15m option which makes that relatively simple, and there’s no suggestion of an attempt to negotiate that down. 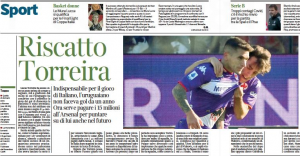 Negotiations are ongoing, but with the player’s agent. Should an agreement be found, which is the expected outcome, then Torreira can continue being a key player for Fiorentina.