It’s been a busy summer for Manchester United, and despite the transfer window being closed, they may be about to finalise their most significant move yet.

Moving Alexis Sánchez on this summer was conceivably a priority for those high up the club given his poor performances and huge wage packet. 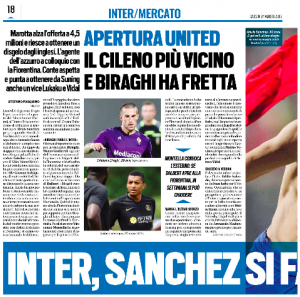 It’s not been easy to find a buyer but recent weeks have seen Inter Milan pushing for a deal, and it seems the Italian club are now close to getting their wish.

TuttoSport cover the situation today and say that Manchester United opened up negotiations yesterday and Inter are now pushing to get Sánchez confirmed before their opening game against Lecce on Monday.

The newspaper says that talks between the club ‘further accelerated’ yesterday and that led to them finding an agreement on a loan deal with an obligation to buy for €15m.

This is all backed up by Gazzetta dello Sport, although they say there is no rush to get a deal done at this point.

The two clubs are now working on an agreement over Sánchez’s wages and how they will be paid during the loan deal, but there has also been progress on that front as well.

Tuttosport say Sánchez will earn around €12.5m for the year, and Inter CEO Giuseppe Marotta raised Inter’s portion of that to €4.5m.

They also say that Sánchez is pushing his agent to get the deal done quickly and both newspapers agree he looks likely to get his wish.

“I have no vanity” – Manchester City star on helping out team, and training ground work

“I have no vanity” – Manchester City star on helping out...