On Friday afternoon, news broke that Real Sociedad are interested in Nacho Monreal, and Noticias de Gipuzkoa were one of the first few outlets to report it.

‘The icing is Monreal’ is splashed on the front page of the Gipuzkoa edition of Mundo Deportivo and within the story it’s explained the La Liga side want the left-back to be the ‘icing on the cake’ for the new season.

It’s claimed the operation to sign the 33-year-old will not be imminent nor will it be ‘simple’, and Sociedad will make a final attempt for the fullback next week.

The defender’s contract runs down in 2020, but the Gunners have an option to extend it until 2021. Sociedad view this as a stumbling block to get the player out of the Emirates.

Their idea is to tempt the player by offering a longer contract than his current deal. According to the claims, he is in favour of joining the Spanish side after listening to their proposal.

Onda Vasca reported on Friday that the deal is at an advanced stage and Monreal is expected to sign a three-year deal with the La Liga side. It was also explained all parties have reached an agreement and the transfer would be made official soon.

Mundo disagree and claim the deal will not be concluded quickly and that only next week will it be known whether the move is feasible.

Sociedad, for their part, are clear that they won’t do anything crazy to sign the Spaniard. They are preparing a proposal and if it’s accepted by Unai Emery’s side, then there will movement next week. 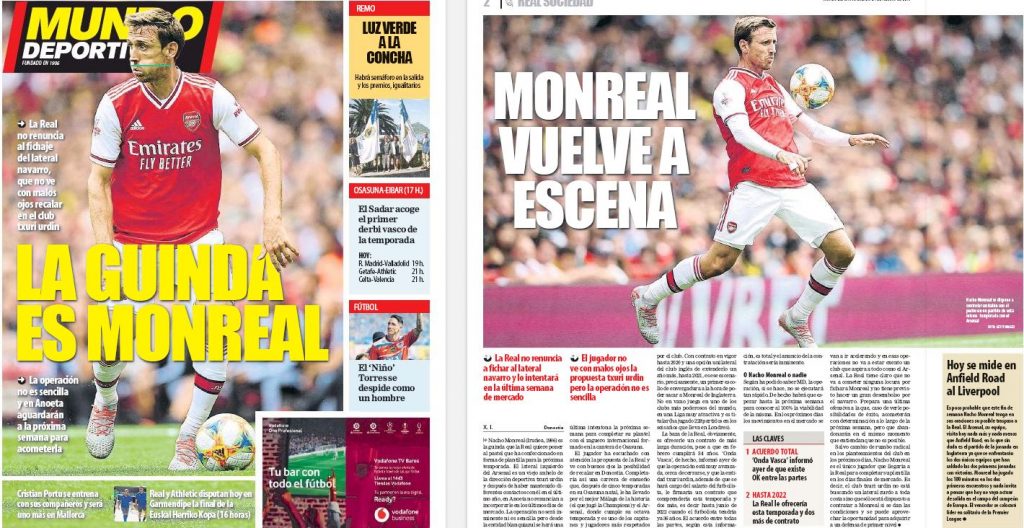 Real Sociedad will only sign Monreal if the conditions for the transfer are met. If not, they will not bring in another left-back.

Should they get a sign the deal can’t be concluded, they will end their interest in Monreal immediately.