Home Europe ‘There is agreement’ – Wolves player can leave club ‘in 24 hours’...
SHARE

La Nazione, a Florence based newspaper, go further today than anyone has before on Patrick Cutrone to Fiorentina claims.

It’s stated the Wolves player can sign for the Tuscany club ‘in 24 hours’ and ‘there is agreement’. That’s the headline, and in the article La Nazione explain themselves.

Fiorentina’s agreement with Cutrone’s representatives is described as ‘downhill’, presumably meaning it’s pretty much done. Negotiations with Wolves are said to be in progress.

The Serie A club want to take Cutrone on loan with a redemption clause of ‘no more’ than €15m, although it’s not made clear if this clause would be mandatory or not.

Should Wolves accept those conditions then the deal will done ‘in a flash’.

There are also other options Fiorentina are considering, but it’s the interest in Cutrone, 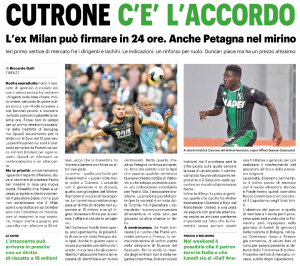 and potential deal for the player, which is the subject of most interest right now.

La Nazione may well be taking things a step further than they currently are, and it’ll be interesting to see if there’s any firm advance on this over the next few days.