A week ago today, we covered claims from France which explained Mauro Icardi is looking to leave PSG and has been offered to Tottenham Hotspur.

The idea was for a move in the winter market, and for Icardi to switch to a calmer environment than PSG. Given the striker’s life outside football has been a huge drama in recent months, the idea was for a winter move to somewhere a little less in the spotlight.

That may not be the best plan, because Icardi seems to take the drama with him, yet Tottenham were pulled into the equation. The claims explained agents had offered Spurs the chance to sign the Argentine, and PSG were ready to agree to an exit.

Friday’s edition of L’Equipe has an article on potential PSG exits in January. When it comes to Icardi, the French newspaper say it would be a ‘surprise’ if a reasonable offer was rejected for the player in January. 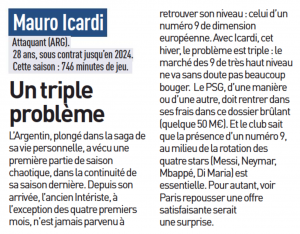 PSG ‘have to recoup their costs’, and whilst those are put at €50m there’s a reasonable chance less would be accepted.

Now it’s over to Tottenham to see if they want to take the bait.

Manchester United player picks up another injury – His season is...

‘Concrete interest’ from West Ham in midfielder – Would be big...