Earlier this month, Mino Raiola gave an interview to the Telegraph and explained Paul Pogba wants a Manchester United stay, but admitted the midfielder needs more support from the Red Devils.

On Monday, Sky Sports had a chat with the super-agent, where he once again reiterated the France international’s “heart is in the right place with Manchester United.”

Raiola also stressed the 26-year-old could be at Old Trafford in a year’s time, provided they qualify for the Champions League.

Italian newspaper La Repubblica also interviewed Pogba’s representative and his comments on Ole Gunnar Solskjaer’s star are contradicting to those he made to the English press.

“Now Pogba’s problem is Manchester [United]. It is a club out of reality, without a sports project. Today I would no longer take anyone there, they would also ruin Maradona, Pele and Maldini. Paul needs a team and a club, one like Juve,” Raiola said.

Raiola made these comments when he was asked if Pogba was arrogant when he said he wanted to become better than Pele.

The World Cup winner returned to United in 2016, four years after leaving the Premier League side for Juventus. 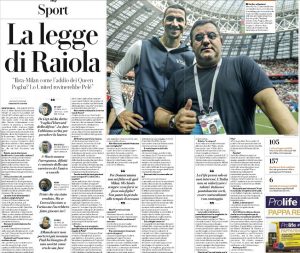 Sir Alex Ferguson then wanted to offer the player a new deal, but he turned it down. The former United manager was critical of Raiola, however, the agent has insisted it was all down to the player’s will.

“For him I quarrelled with Ferguson. Paul is the only one to say no to him [Ferguson]. He never digested it and took it out on me,” Raiola explained.