Home Europe Agent has been ‘working hard’ to get defender to Leeds United –...
SHARE

Two weeks ago, SoccerNews reported Brøndby IF defender Hjörtur Hermannsson has emerged as a target for Leeds United.

It was also explained the Whites have already set aside more than €2.5m to acquire the centre-back’s services.

Monday’s edition of Ekstra Bladet takes a look at Brøndby players who will either be offered a new contract or be sold this summer.

Hermannsson has a year left on his contract side and the newspaper states ‘it points to goodbye’ for the 25-year-old.

Marcelo Bielsa’s side get a mention and it’s claimed the defender’s agent has been ‘working hard’ to get his client to Elland Road. However, the ‘process does not seem to succeed’, suggesting a move to Leeds is unlikely to take place.

Ekstra Bladet doesn’t provide an explanation for why the newly promoted Premier League club are not planning to sign Hermannsson. 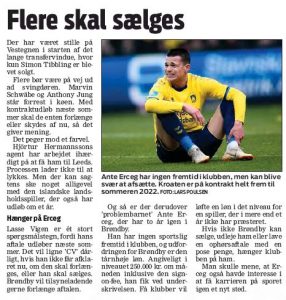 With Leeds not focusing on the player and Brøndby planning to sell the former PSV Eindhoven man, the Danish outlet adds Hermannsson could move elsewhere this summer.