Sorry Everton fans, but it looks like the Jean-Philippe Gbamin transfer could be more complicated than initially seemed the case.

On Wednesday we covered claims from Germany that Jean-Philippe Gbamin has ‘almost reached an agreement’ to sign for Everton this summer.

Not so long later, Le Parisien published an article which had quotes from ‘his agent’ Bernard Collignon: “Jean-Philippe is attracted by the idea of ​​joining Everton. To discover the championship of England in a club of the top part of table would represent for him a very beautiful opportunity and a very good step.”

It all seemed relatively simple and like a deal could be sorted out soon.

However, Gbamin has now posted an Instagram update stating: ‘I confirm that the only agent authorised to represent my interests is Gregory Gelabert’ 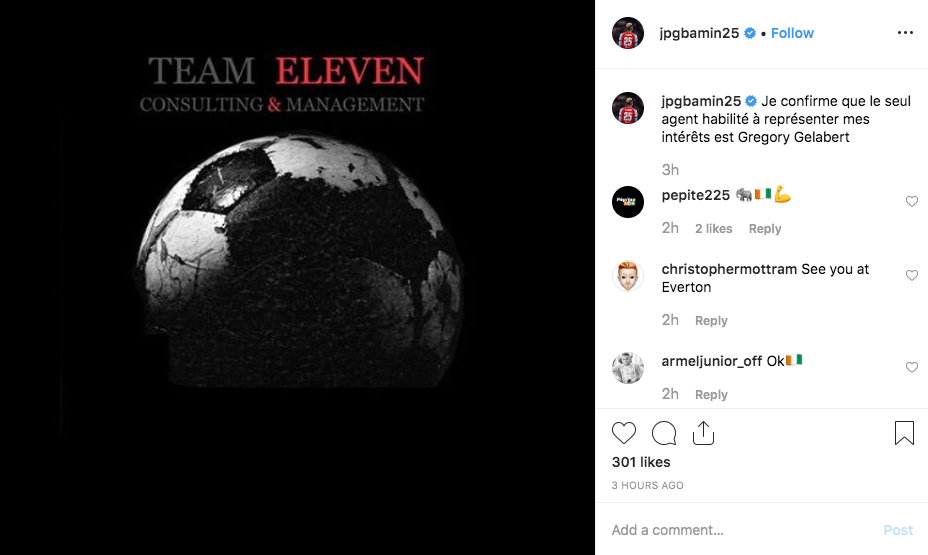 Transfermarkt have Collignon listed as the agent, Wyscout have no agent listed.

In June of this year, Collignon spoke to the German media about interest from several clubs in a player who was very much presented as his client: “In January 2018 Klopp called Mainz and wanted to commit him as a centre-back, who also helps out in midfield. But Mainz did not want to let him go in the middle of the relegation battle. In the summer, Liverpool signed Fabinho instead,” says Collignon.

“I had meetings with Liverpool, Tottenham, Arsenal, Everton and many other clubs. He is in the shortlists. However, he is not a top candidate because his exact position is unclear.“

A bit more digging finds an interview Collignon gave to the German media in March 2018, when he was described as the player’s consultant.

There are countless French and German articles in which he’s named as Gbamin’s agent.

So what about Gregory Gelabert?

His agency is Team Eleven, and there’s no record of him talking about Gbamin. He is, however, listed as the player’s agent by the French Football Federation.

There is record of at least one legal dispute, in 2017, in France over a footballer and a Team Eleven representation contract.

And then in April of this year, L’Equipe reported a dispute, this time regarding Didier Ndong. Gelabert had filed a complaint after alleged harassment from the player’s previous agents.

Ndong left Tunisian club CS Sfaxien in 2015, and his agents at the time, Brahim Bousselmi and Mourad Boughalmi, wanted to get him a big move to France. Lorient were keen, however, the agents couldn’t manage the deal because they weren’t registered in France so wouldn’t be able to receive commission, therefore they collaborated with Gelabert.

“We were on 50/50,” Bousselmi told L’Equipe. “And we continued in this way for the transfer to Sunderland and the loan to Watford.”

There had been a verbal agreement from Lorient for 10% of a future transfer fee, and when the player was sold to Sunderland for €18m that represented a huge €1.8m, but it never came.

They were told there’d been an organisational change at Lorient and the agreement wouldn’t be honoured. Bousselmi and Boughalmi weren’t convinced and pursued Gelabert and his Team Eleven partner.

Feeling harassed, the French agents contacted the police and that was the end of the matter.

It’s not unusual for footballers to have several consultants, or at least several working on a transfer, yet Gbamin sending the Instagram post out obviously means something.

Should there be an agent dispute, over who officially represents the player, and who will receive commission, then it could be a problem for Everton when negotiating the signing.

Collignon is on record as saying he’s already had meetings with the Toffees about the Mainz player, so Gbamin’s social media step is certainly intriguing.