Newcastle United defender Chancel Mbemba has an agreement to join FC Porto on a four-year deal, according to reports from Portugal today.

Front page news from newspaper O Jogo claims it’s all agreed between the player and the Dragons, with only a deal between the clubs missing for now.

The defender’s agent Fabio Baglio reportedly met Porto representatives in England on Monday and Tuesday to negotiate the deal. The official has even spoken, albeit briefly, to O Jogo about the talks.

“We are effectively in negotiations, but he’s not a Porto player yet,” Fabio Baglio told the Portuguese newspaper. “I cannot comment any more for now. The plane will take off, I will have to hang up.” 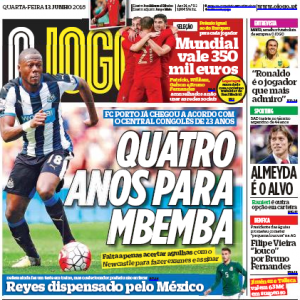 O Jogo doesn’t seem to have an idea of how much Porto are paying Newcastle for Mbemba.

They just say that the Champions League spot is a big attraction for the player, and the relationship between the Dragons and Magpies is helping the deal. The clubs are playing a preseason friendly in July.