Home Europe Agent arrives in Manchester to try and get Man City signing over...
SHARE

Kalidou Koulibaly to Manchester City is a complete mess.

Last week, Napoli president Aurelio De Laurentiis told the media of the difficulties in negotiations. Having fallen out during the Jorginho transfer, with the player opting for Chelsea at the last minute instead of City, the English club haven’t been willing to speak directly to Napoli.

That’s seen agent Fali Ramadami travelling between the two clubs trying to build a deal. He visited De Laurentiis at least once during the Napoli chief’s summer holiday to Capri, and now he’s in England.

Corriere dello Sport report the agent has arrived in Manchester, to try and ‘act as a bridge’ in negotiations. Presumably, he’ll be looking for a final offer from Manchester City, because Gazzetta say he’s expected to travel back to Capri on either Monday or Tuesday. 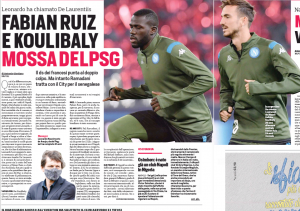 That offer could then be presented to De Laurentiis, and whatever the amount it, if it’s not accepted this time then it’s perhaps time for Pep Guardiola’s club to move on to other defensive targets.