Tiémoué Bakayoko is getting closer to a return to AC Milan this summer. The midfielder signed for Chelsea in 2017 from AS Monaco, but failed to replicate his best form for the London club.

That led to a loan to AC Milan, before he returned to Chelsea and then went on loan to Monaco for the last campaign.

Milan have been trying to reach an agreement for some weeks, finding Chelsea a tough match in negotiations. Sunday’s edition of Corriere dello Sport reports there’s now a general agreement between the two clubs.

The Serie A club will pay around €3.5m for a season long loan, and they’ll have a clause enabling a permanent transfer for €30m.

As part of the general agreement, the two clubs haven’t yet agreed if part of the €30m can be made up by bonuses, with Milan wanting that to be the case for a few million. 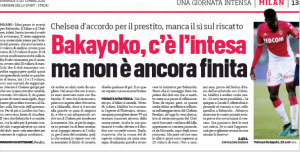 When that is sorted, Milan need to agree wages with Bakayoko for the possible permanent transfer.

It’s not done yet, but this is a step forward.