James Rodriguez should soon become an Everton player, after a delay in negotiations saw things drag on over the weekend.

Monday’s edition of AS reports the Colombian had a medical test on Thursday, which went fine, and he’s been pictured in Liverpool and had dinner with Carlo Ancelotti.

The problem, as far as AS have it, has been between Real Madrid and Everton. Whilst there’s been rough agreement on a €25m transfer fee, the exact specifics hadn’t been defined at the end of last week.

That could be due to any bonuses involved, the payment structure, or potentially some kind of pay-off given James will be receiving lower wages on his Everton contract than he did in Madrid.

It’s worth making it clear that AS don’t give any suggestion the transfer could fail at this late stage. 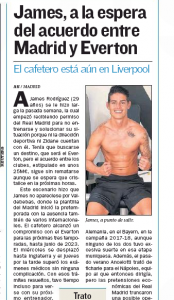 They actually say an ‘official announcement’ is expected, and that the two clubs should sort the details out in the next few hours.