Unable to sit in the Milan dugout since November 14th when he tested positive for Covid-19, Stefano Pioli could make a return for the game against Neil Lennon’s troubled Celtic.

That’s what Gazzetta dello Sport are reporting on Monday, claiming the manager ‘hopes to be able to return to the bench on Thursday’ when the Serie A side welcome Celtic in the Europa League.

Since his positive test, Pioli has had to work remotely and has been unable to work directly with his squad, although that hasn’t stopped them from performing on the pitch.

They beat Napoli 3-1 away from home in their first game without their manager, followed by a 1-1 draw against Lille and a 2-0 win over Fiorentina at the weekend that saw them go five points clear at the top of Serie A. 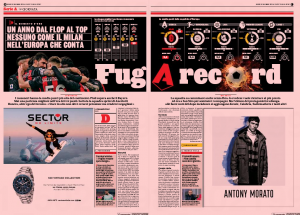 We’ll have to wait and see whether Pioli gets his wish of facing Celtic from the side of the pitch, as he’ll need to test negative for the virus before doing so.

If not, it will once again be Daniele Bonera in the dugout, the man who has overseen the latest run of form in his boss’ absence.

Whoever is on the bench, this will be a tough match for Celtic, but also an opportunity to end their poor run in some style.