Barcelona failed in their efforts to sign Paris Saint-Germain’s Neymar in the summer, even though the forward was keen on returning to the Camp Nou.

Tuesday’s edition of Mundo Deportivo claims the Brazil international has ‘not abandoned’ the idea of returning to the Catalan club and has confessed this during his last two visits to Barcelona, out of which one of them took place last weekend.

He ‘insists’ on returning to his former club.

It’s claimed the 27-year-old has already informed his friends at Barca that he hopes to ‘fulfil his dream’ of returning next year.

Neymar is currently injured and his immediate goal is to regain full fitness and be fit in time for PSG’s Champions League clash against Real Madrid at the Santiago Bernabéu later this month, so that he can once again showcase his abilities. 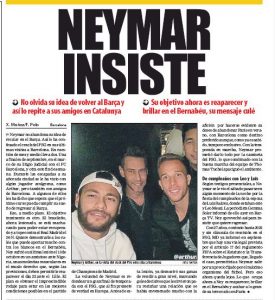 His intention is to finish this campaign on a high with Thomas Tuchel’s side and also restore his relationship with PSG’s fans, which deteriorated when his wish to leave became clear.

The former Santos star’s contract with the Paris club expires in 2022 and he has no release clause in his current deal.