Marco Verratti missed the end of last season and start of this campaign due to two different injuries and he has now regained full fitness.

The Paris Saint-Germain midfielder sat down for an interview with Le Parisien in which he spoke on range of topics, including his relationship with his current manager Thomas Tuchel and his predecessors, his fitness, Champions League defeat to Liverpool and others.

Unai Emery was asked to step down as the Ligue 1 winners’ manager after the end of the last season and was replaced by the ex-Borussia Dortmund at Parc des Princes.

The Spaniard then moved to Arsenal, and Verratti has been asked what’s different between Emery and Tuchel.

“All coaches have a different way of going to the players, to make them understand things. Sometimes with Emery, it was little difficult,” the Italian international explained.

When further quizzed whether the difference between Emery and Tuchel is down to the ‘human relationship’, Verratti said: “I think, yes. Tuchel does not play. We see that he is happy in training. We train with a smile, but we are always serious, we know what we do.

“Work hard, but with a smile, this is the best method. Finally, football is always a sport, even if you are well paid and it has become a job for everyone. Coming to training with the sad face, it does not work. We found our smile, which we had a lost a little bit.” 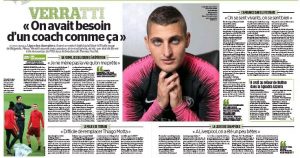 It is evident that Verratti is not a fan of Emery and is also enjoying life under his successor at PSG.