Manchester City are looking at Sergio Roberto and their interest in him is ‘on record’, according to Mundo Deportivo.

Lautaro Martínez and Miralem Pjanić are Barcelona’s priority targets this summer and they are working for exchange operations with Inter Milan and Juventus respectively.

Roberto’s name appeared as an option as part of the swap deals with the two Serie A clubs, but he has discarded the possibility of going to Milan or Turin.

The 28-year-old came up through the ranks of the Catalan club’s youth system and made his first team debut when Pep Guardiola was in charge at the club.

Guardiola and Txiki Begiristain know him ‘very well’. It’s claimed the latter asked Barcelona for the Spain international after receiving approval from the former.

Roberto can operate as a full back or midfielder and has a contract with Barca until 2022.

Mundo state Quique Setién’s side have asked for time to take a decision on the versatile player. 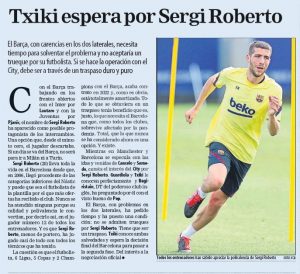 Should Barcelona decide to let him leave, it will only be for a ‘pure transfer’ and a swap deal will not be considered.

Begiristain is waiting for the Spanish champions’ final decision to take another step, which would be converting Manchester City’s interest into official negotiations for Roberto’s signing.