The Catalan media have been regularly discussing Philippe Coutinho’s desire to return to the Premier League this summer.

Tottenham Hotspur are one of the clubs linked with the Barcelona owned player and on June 2nd, we relayed news from Spain the playmaker ‘does not rule out’ Spurs.

Mundo Deportivo explain José Mourinho is ‘not in favour’ of his side paying €100m demanded by Barca for the Brazilian.

Quique Setién’s side are also willing to allow the former Liverpool man go out on a temporary deal for a loan fee of €10m.

The north London club’s boss is of the belief that Coutinho could be included in his side, but not at the ‘exorbitant’ price mentioned for both loan and permanent transfers.

In addition to this, the attacking midfielder earns a hefty salary and the Camp Nou side want any club taking him on loan to pay his full wages.

Mourinho doesn’t want the north London club to bring Coutinho in on a high salary as he fears current players at the club could then demand better pay.

Mundo also states: ‘Sources close to the club [Barcelona] insist that Tottenham does not want to take players [on loan] to revalue them and that they can then leave.’ 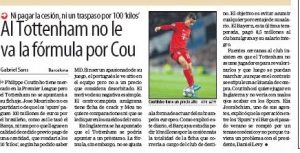 Coutinho ‘wouldn’t look down’ on Spurs, but the report makes it clear that Mourinho doesn’t want the transfer to happen at the figures stated.