Arsenal is of interest to Inter in their attempts to replace Achraf Hakimi, who is set to head to Paris Saint-Germain in a €60m+ deal.

Gazzetta dello Sport made it very clear on Tuesday, and now it’s Corriere dello Sport’s turn to add their two cents on the matter this Wednesday.

The Italian newspaper look at the options being looked at by Inter, and it’s explained the Serie A side have ‘turned decisively’ on the Arsenal defender.

Pushed to one side towards the back end of the season, Bellerin appears to have lost some trust from Mikel Arteta, which is why there’s an opening for the Italians to exploit. 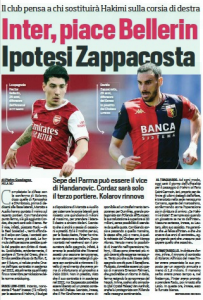 It’s explained that ‘after the contacts over the weekend with the Spaniard’s agent’, the possibility of a loan ‘has emerged’ from the Gunners’ end.

While there’s no mention of a purchase clause, Arsenal’s willingness to get a deal done would only be because it would ‘allow him to play continuously and regain the level of performance he had before injuring his knee’.

Something we’ll be keeping an eye on, because it’s becoming a regular feature in the Italian newspapers these days.