Newcastle United are soon making an attempt for the signing of Benfica winger Rafa Silva, according to reports from the Portuguese media today.

Newspaper Correio da Manhã writes that the Magpies should advance ‘in the coming days’ with a bid for the 28-year-old.

It’s said the Premier League side have been following the player for a long time, and with the Eagles now accepting to negotiate his sale, he’s ‘on the exit door’.

Still, it won’t be that easy to convince Benfica, as it’s said they won’t let Silva move for less than €25m, and shall analyse the offers, which could arrive from the ‘many clubs’ who are interested in his signing. 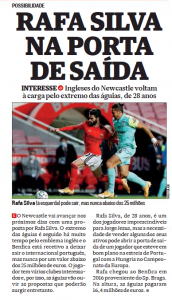 Rafa Silva had nine goals and ten assists for Benfica this season, and also made part of Portugal’s squad for the Euros, even though he only took part in the first two games.

The winger is protected at the Eagles by a contract running until 2024 and a release clause of €60m, so the Lisbon side are full of arguments not to let him go for less than the price demanded.

Despite having that headline saying he’s on the ‘exit door’, Correio da Manhã also writes his departure is a ‘possibility’, so things may not be as advanced as they may look.

“I don’t know why it wasn’t done” – Chelsea player reveals he ‘gave agreement’ to other club, transfer never happened

Club ‘rubbed their hands’ at prospect of Tottenham transfer – Helped...

“I don’t know why it wasn’t done” – Chelsea player reveals...