With Newcastle United continuing to get the spotlight from the European media, Italian newspaper Tuttosport today features a story about everything that happened since the club’s takeover.

Their story first talks about the arrival of Saudi Arabia’s Public Investment Fund, then points out the details of Steve Bruce’s departure from the managerial job, and then talks a little about the hunt for a new coach.

Tuttosport says the Magpies have ‘drawn up’ a list of names of those who could take charge of the squad.

The outlet brings some information on Paulo Fonseca, who’s ‘an old acquaintance of Italian football’. They claim that he has ‘the preference of Amanda Staveley on his side’, and that gives him an advantage over other candidates. 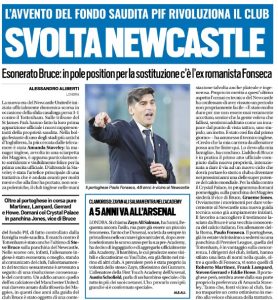 According to the report, ‘sources close to the club’ have been revealing ‘certain optimism regarding the quick closure of the deal’.

While the Italian media continues to provide information on the Fonseca talks, the Portuguese press remains quiet about it, as despite giving big coverage to his chances of taking charge of the club, they only know what’s being said in other countries.

Earlier today, Newcastle’s interim manager Graeme Jones confirmed that he’s been asked to take charge of the club for two games while they appoint a new boss.