Wolverhampton Wanderers are close to making a formal offer to sign João Palhinha from Sporting, according to a report from the Portuguese media today.

Newspaper A Bola writes that Wolves made an approach with the player’s representatives to learn the amount needed for a summer move. This is said to be the ‘last step’ before an actual bid, with the process set to ‘accelerate’.

A small snippet on A Bola’s front page says ‘Wolves accelerate for Palhinha’.

Even though it had many times been said Wolverhampton would wait for potential departures in their midfield before going for replacements, the outlet now writes that the Molineux side will no longer hold back before advancing for Palhinha.

The midfielder is said to be an ‘old desire’ from manager Bruno Lage, and since he’s never hidden his preference for the Premier League, this is said to be a good deal for all those involved. 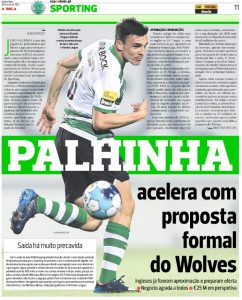 A Bola says this formal offer ‘will really exist’. Sporting demand €25m for the sale, and now wait to see how much Wolves will put on the table.

Even though Tottenham ‘collected information’ on the player, the story claims the Molineux side were always the ‘main interested’ club in this race.