Still used to the Championship reality, many Wolves fans take Raul Jimenez’s arrival as a regular loan deal, with a pretty big buying option just in case he really impresses for the club.

But the move is seen differently in Lisbon, where the local media are already thinking of the huge profit the player could make at the end of the 2018/19 season.

Today’s story from newspaper Record says Jimenez ‘could make history’ at Benfica by being the club’s biggest sale ever. And we know the Eagles are pretty good sellers, don’t we? 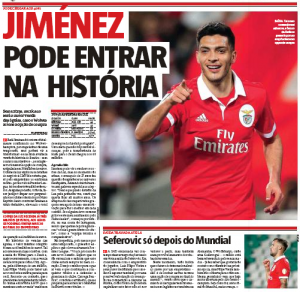 Benfica president Luis Filipe Vieira had already claimed that Jimenez would one day be the club’s biggest sale ever.

And this €41m total amount almost seems clearly chosen for that purpose.

Now let’s see how the striker does at Wolves and if he can convince the club to buy him.

From Italy: Man United transfer in Solskjaer’s hands, price down if he picks fight with player

From Italy: Man United transfer in Solskjaer’s hands, price down if...

“There was something” – Player suggests Manchester United January interest was...